Are Mushrooms the Future of Alternative Leather?

At the outset “there were three of us in a basement with plywood and plastic sheeting,” said Ms. Wang, who is now the company’s chief of culture. “We were a start-up biotech company, but we were created by artists.” 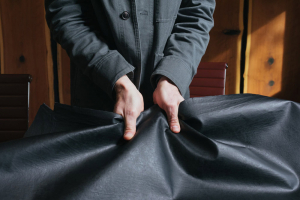 The company, whose headquarters are in Emeryville, Calif., has obtained more than 75 patents and now has over 160 employees in the United States, France and Spain. It has also secured collaborations with high-end companies like Hermès and, most recently, the furniture maker Ligne Roset and GM Ventures, the investment arm of General Motors.

If it continues to scale up, MycoWorks has enormous potential: The leather goods market exceeded $400 billion in 2021 and is expected to surpass $720 billion by 2030.

To date, many of the leather alternatives are made from the plastics, polyurethane or polyvinyl chloride (better known as PVC), sometimes resulting in the derisive term “pleather.” In contrast, MycoWorks “can achieve the same quality and performance as animal leathers without the need for any sort of plastics,” Matthew Scullin, MycoWorks’ chief executive, said at a temporary exhibition showroom in New York in the spring.

In August, MycoWorks broke ground on a 150,000-square-foot plant in Union, S.C. Upon completion by the end of 2023, it will start producing at scale — several million square feet of Reishi per year. The new factory will allow the company to meet increasing demand; Mr. Scullin says that it has had thousands of inquiries from potential clients.

Read the full article by Ellen Rosen on The New York Times.

An Exclusive Collaboration by Hermès and MycoWorks

THE FRENCH-AMERICAN HATMAKER WORKING WITH REISHI™

An Inspiring Collaboration Between Nick Fouquet and MycoWorks

One-of-a-Kind Art Piece Made with Reishi™