Coverage of Our Exclusive Hermès Collaboration

Last week we presented the first object made with Fine Mycelium™: the Hermès Victoria bag in Sylvania made of Fine Mycelium, H plume canvas and Evercalf calfskin. An exemplar of a new generation of exclusive materials, Sylvania made out of Fine Mycelium is the result of three years of exclusive and collaborative work by Hermès and MycoWorks. Fine Mycelium, the genesis of Sylvania, is produced in the MycoWorks facility, then tanned and finished in France by the Hermès tanners to further refine its strength and durability, matching Hermès quality standards. Finally, it is shaped in the Hermès workshops by their craftspeople. Sylvania made with Fine Mycelium should not be referred to as mushroom leather. It is differentiated by a proprietary cellular structure which enables its strength, durability and hand feel: the result of our patented technology.

By week’s end, this historic partnership and world debut had made waves through major fashion and luxury news outlets and across the social media landscape.

Business of Fashion was first to break the news, stating [Hermès’s] “Victoria” travel bag has been reimagined in canvas, elements of calfskin and Sylvania, an amber-hued material Hermès has developed in partnership with MycoWorks, a California-based start-up that has developed a patented process to turn mycelium—a network of threads from the root structure of mushrooms—into a material that imitates the properties of leather.”

Numerous digital fashion news sites—excited about the historic release—were quick to share the breaking news with their readerships.

Departures was quick to point out that “If its first brand collaboration is anything to go by, Fine Mycelium will be a huge success.” and Complex added “MycoWorks reportedly began collaborating with Hermès about three years ago, exploring the ways they could improve their sustainability practices without compromising the quality and durability of the high-end goods.” 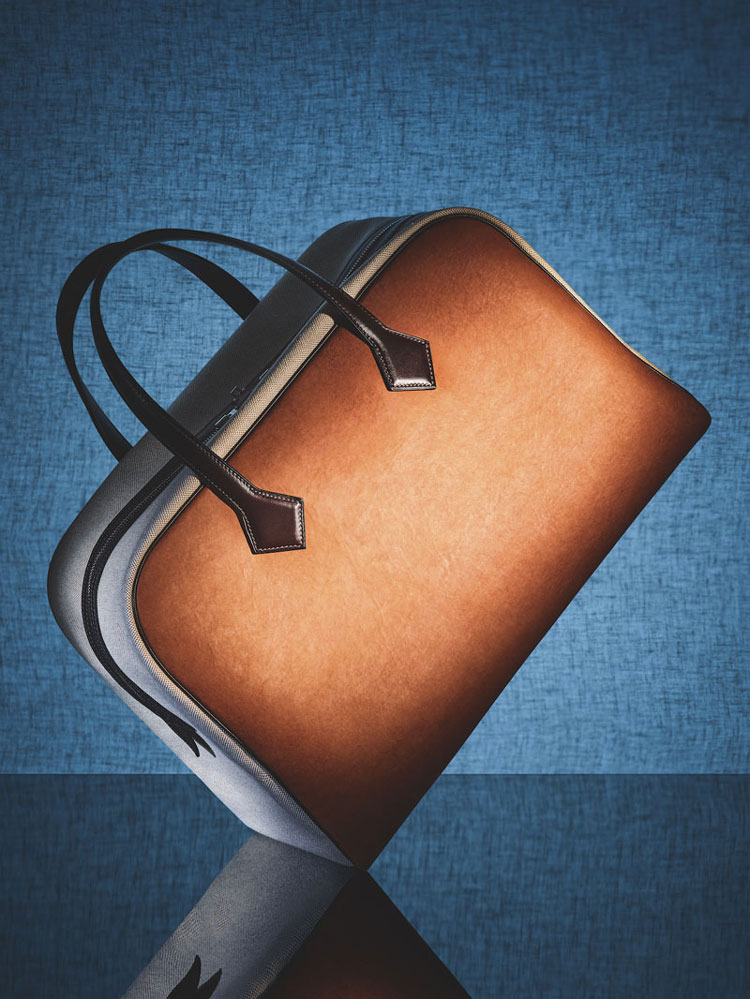 Vice’s i-D reports “This week, Hermès—arguably the arbiter of the most luxurious, expensive leather goods—announced a plant-based collaboration with MycoWorks, a California-based start-up that has developed a patented process to turn mycelium—a network of threads from the root structure of mushrooms—into a material that imitates the properties of leather. While HypeBeast notes that, “Over the past few seasons, the luxury fashion industry has seen a seismic shift towards more green solutions.”

Fast Company states “MycoWorks unveiled its material at the 2016 Venice Biennale of Architecture. The following year, it partnered with Hermès to create a custom version of its product. Sylvania will be manufactured in MycoWorks’s California facility and shipped to France, where Hermès experts will tan it and incorporate it into products. Last year, MycoWorks launched Reishi, which will be available for any fashion brand to use.” High Snobiety points out:

“Hermès is the first major luxury house to be publicly experimenting with mushroom-based leather alternatives.”

Design Boom concludes “In comparison to similar materials in the marketplace, MycoWorks and its Reishi material is a world ahead in terms of strength, durability, and feel. Grown to size and able to be finely-tuned as cultivated, the material allows luxury fashion brands to consider product construction from the material up, and sustain their traditions of craftsmanship.”

An Exclusive Collaboration by Hermès and MycoWorks

Returning to Our Roots for Elegance and Sustainability in Fashion

When Fashion is Fungal

How Reishi™ Could Bring Fashion Closer to Circularity